Do you get positive thoughts, or do images of thugs in leather vests like in the TV series Sons of Anarchy come to mind?

Most likely the latter, but think again: this is the story of how a very simple idea from a remote motorcycle club becomes a worldwide online phenomenon, creating awareness about and raising funds for prostate cancer research. 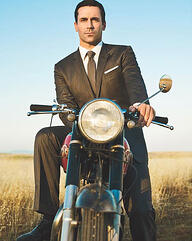 In 2012 a member of the motorcycle club ‘Perth Café Racers’ in Perth, Australia saw a picture in a magazine featuring the actor Jon Hamm playing the character Don Draper in the TV series Mad Men. In the picture, ‘Don Draper’ was wearing a classic cut suit from the sixties, sitting on an old English classic motorcycle.

The words “we should have a suit ride” were uttered in the motorcycle club which shared the same faiblesse for classic-looking bikes, and the rest is history still in the making.

This idea was picked up by the club’s founder, biker and entrepreneur Mark Hawwa. He gave the suit ride the name The Distinguished Gentleman's Ride and through networking, Facebook communication and the help of a few creative friends, the idea spread to 64 cities around the world that same year. On the last Sunday of September 2012 the first “suit ride” took place with over 2,500 riders.

Bikers of all origins, ages, religions and gender took part and dressed up as elegantly as possible and rode their motorcycles in slow pace through the urban areas of their home towns.

Just for fun. And fun it was: both for the participants as well as for the bystanders seeing all these dapper men and women enjoying their ride on classy looking motorcycles.

One year later, Mark, knowing the hearts and minds of the many people in the bike community he was part of, decided that a charity should be connected to the ride. The web page www.gentlemansride.com was created, using the online fund raising platform FunRaisin'. The charity picked was men’s health and prostate cancer research in particular.

FunRaisin' supply you with the right promotional tools, e.g. a web site, monitoring, reporting etc., to raise money online for whatever cause is close to your heart.
Even though participants didn't have to raise a penny to be allowed to join the ride itself, the response from the riders was enormous: all over the world, in over 145 cities, bikers began raising money at an incredible speed, challenging each other and their community to both help raise money for the cause as well as getting doctor's appointments for a check-up of themselves. 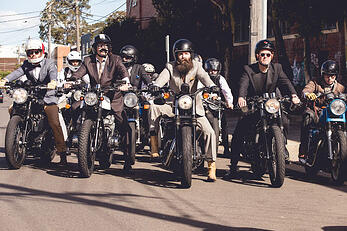 Over $ 270,000 were raised in 2013 when the ride took place, and was handed over to the Prostate Cancer Foundation of Australia. When the day was over, more than 11,000 bikers had made the ride in their town.

The goal for the ride in 2014 is to exceed $1.000.000 in donations to be handed over to 4 different prostate cancer research foundations around the world.

So, as ‘simple’ as this; a single idea spawned in a remote part of the world, has grown into a global phenomenon in a very short time. All thanks to easy-to-use marketing tools like FunRaisin', familiar at-hand social media like Facebook to spread the word, and of course the dedication of one man in particular and the voluntary effort of bikers united across the globe.

What event or charity is close to your heart? Thinking it’s too much of a struggle to take action and actually do something that will have an impact?

Think again: it’s 2014 and all the tools are out there. All you need is the will.

And, if you hear a distant roar in your home town on September 28, keep an eye out for dapper gentlemen and ladies on classics, bobbers, café racers, trackers, scramblers and undefinable two-wheeled machines.

Now you’ll know who they are: not thugs in vests, but Distinguished Gentlemen and Ladies kicking prostate cancer in the butt.

If you care to make a donation, go to http://www.gentlemansride.com/rider/nickeborg and sponsor this author’s ride in the Gothenburg event.

If you want to join a ride, simply register and join the Facebook community

Facts & figures about the foundations and the research