Is Amazon your competitor or your partner? 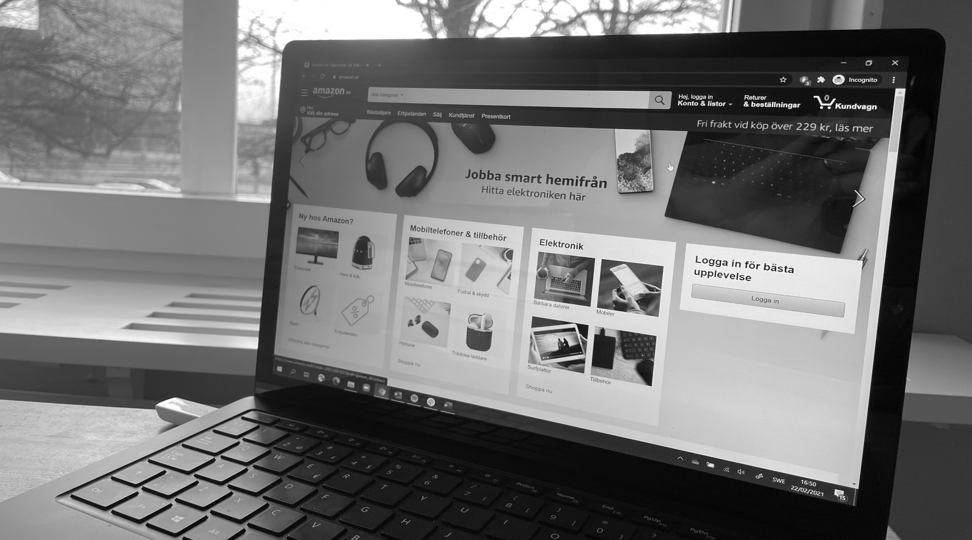 At the end of 2020, Amazon launched their Swedish site — over 20 years after their launch in other European markets like Germany and the UK.

The Onlinification Pod · Is Amazon your competitor, or your partner?

It took a while, but now Amazon is here. How will they perform in Sweden's already very mature e-commerce marketplace? And how should you as a business see Amazon — are they your biggest competitor or a future partner?

To discuss Amazon (which we seem to mention in every episode anyway), I sat down with Anders and Stellan, two long-time Amazon customers, to see what they think and how they see Amazon and Zooma working together in future.

Enjoy — and don't forget to subscribe to the podcast not to miss any future episodes. You can subscribe on Spotify, Soundcloud, and also right here on the blog, where you'll get an email notification when we release new episodes.

Alexander Evjenth: [00:00:09] Hi and welcome to The Onlinification Pod, a podcast produced by Zooma. I'm Alex, your host, and in today's episode I got the chance to talk with Stellan and Anders about a company that they often refer to as the company that treats you exactly how you want to be treated. It's Amazon. We're going to talk about what Amazon is, how it became so successful and how you should view Amazon as a business - is it a potential partner or a competitor? Enjoy.

Anders Björklund: [00:00:53] I don't know exactly how you ask, but I would say in my case, they are the answer to one of the ever most-asked question by me, which is "what brand treats you exactly like you want to be treated?" No one in my world is even close to Amazon. That's how I describe Amazon. They treat me exactly like I want to be treated, and they have done so since July 5 1994.

Stellan Björnesjö: [00:01:29] I bought a book a long time ago, which I think was titled The Everything Store, and I think that's a very good description of Amazon and the position that they chose fairly early on and they have relentlessly pursued since then. That's the short description.

AB: [00:01:58] In addition to many Swedish people that I have seen commenting publicly on the so-called internet, I've been a customer for 26 years, and from my perspective, there's a very, very easy way to describe them. Relevant and never intrusive. And from a sort of answering why they have become so successful, is testing and structure and very much using common sense. That's my short answer of how they have become so successful.

SB: [00:02:41] Yeah I agree. And if I'm going to add something to that, it will be looking back at the first annual letter to shareholders that Jeff Bezos is still referencing, saying that it's always "day zero" or "day one". And I think it's, there is a lot in this that if it's day zero and not day one, it means that we're still a startup, and if you can maintain that but still be a giant, then you end up in a situation where you tend to become successful. When you go stale and you end up further in the process, you optimise for other things and then you reach mid-life.

AE: [00:03:30] So treating customers like customers want to be treated, and the ability to operate like a startup, kind of.

AE: [00:03:40] Sounds good. So recently Amazon launched in Sweden. Anders, you mentioned you've been a customer for a long time for Amazon. Have you made any purchases on the Swedish version yet, privately or professionally?

AB: [00:04:00] Privately on the Swedish one, mostly because I think I know about where they are with it. Historically, I had to buy for, obvious reasons, through US. After that, I have always bought through UK, and now I start to test what they have and don't have on the Swedish site, the .se, compared to the .co.uk. And my son is OK in English and most likely he won't hear this pod. Yesterday I bought a beautiful chess game for him, which I first planned to buy to the Swedish site, but it turned out that through the US side I could buy an even nicer one, so that we bought yesterday.

And tonight when we go to our summer house, I know that there are three different Zlatan shirts that we bought, one through the Swedish site and two through the UK site. So that's what I've done lately privately. And for Zooma, I bought two books from UK Tuesday, so I believe that we will get them today or Monday.

AE: [00:05:22] And have you experienced any difference as a customer buying from the Swedish one versus the UK and US?

AB: [00:05:32] That I'm spoiled with, that they have a few more things through UK and definitely through US than they have right now on the Swedish one. But I have heard so many comments from people who've been first time visiting Amazon, and we can think whatever we want about how surprised they get and what I have heard privately are the prices - "how the hell can they make money, when the eyeliner that I used to pay a 180 kronor for," someone told me, "is 89 kronor at Amazon?"

And we can think a lot of things about that, about monopolising and so on. But privately, the people who spend their time on checking what they have and how it functions, not the ones who complain about auto translation, they are surprised about the prices.

SB: [00:06:30] It's also a fact that Amazon is, from the US basically and web services, is subsidizing e-commerce in Europe, because they've just made losses, basically. So, yes, some competitors have had to adjust their pricing in order to compete. That's the way it is. And I guess everyone in Europe is probably pretty good at making sure that they operate according to laws and regulations in Europe. And then the playing field is the same anyway. So I don't think we should sort of bash them too much about that. For now at least.

I've personally bought a Christmas calendar, and I bought it from Amazon just because it was sold out where I intended to buy it from, and pricing was roughly the same. So not a big difference in that.

AE: [00:07:30] So most of our listeners, they are operating in B2B. And I'm just curious, have you bought anything professionally yet, Stellan, or for Zooma, or?

SB: [00:07:43] No, I haven't, but I could well imagine myself doing, especially if I was, let's say, in the service industry when I go and buy screwdrivers and nails and all that type of stuff, I see all the service guys' cars parked outside from both bigger construction companies and installer companies and so on. And of course, then down to single people, small firms. But it's interesting that they no longer only buy at... what's "grossister"? They no longer just buy at the outlets that they used to do. They also buy at normally sort of consumer chains. And so I think we'll see that behavior online as well. And Amazon is probably going to be a catalyst of that also.

AE: [00:08:39] So how should B2B companies think about Amazon, are they a potential partner or a competitor?

SB: [00:08:46] Yeah, that's a very important question to ask yourself. And I think the answer depends a lot on where you are in your business at the moment. I myself, if I was a startup that wanted to reach out broadly in a very short time period, I would consider Amazon as sort of a starting platform to make that leap. If I had a sort of very well organised distribution chain and sort of a high level of protective borders around my business, I'm not so sure that I would take the leap and open up to Amazon as a sales channel.

So I think it depends on your position. And you have to think about the competition in that way as well. So your smaller competitors will definitely utilise Amazon sooner or later. And then the question is, will that make them leapfrog you eventually, or what do you do to sort of tackle that? So you can't ignore, even if you decide not to go with Amazon, you can't just ignore Amazon. You have to make an active plan for Amazon.

AB: [00:10:05] I mean, you have the possibility, and I speak generally now, you have the possibility to ask yourself a couple of questions connected to your question. We have seen examples through the years where companies have actually come in a position where they compete with themselves, and themselves being Amazon, where distributors to wholesalers and local agents have decided to go with Amazon.

So you have to ask yourself a question, which is, are you sure you have all the agreements and contracts in place when it comes to your partners and your wholesalers and everyone else? You have to ask yourself if you can, if you have the right knowledge and access to drive successful e-commerce on your own without Amazon or Alibaba or whoever, you have to think when you go to a new country where Amazon is perhaps present and active, if the investment on doing it yourself versus doing it together with Amazon in a country is relevant, you have to think through your brand what it means for your brand, and you have to think through what your principle is when it comes to customer data. Do you want to know, and do you want to have and own all the transactional data? I'm just throwing up a couple of questions now, but you need to be very, very structured and firm on when when you do this.

You need to answer a couple of questions when it comes to everything from, as mentioned, data to contractual things. Although a very broad answer. But as long as you can make the decision yourself, make sure you answer all the right questions.

AE: [00:12:01] So Stellan, do you have any recommendations for companies that face these questions right now?

SB: [00:12:08] A very important one I think is that the decision about Amazon, which you have to make then, as I said, regardless of whether you ultimately sell with them or not, should go at the highest level. It shouldn't be some individual somewhere who takes some initiative and does something, breaching, like Anders said, with contractual things and so on, where you end up competing with yourself eventually. And so it really needs to be an active decision on "how do we tackle Amazon at the very highest level" in your company.

AB: [00:12:48] I'm pretty tired of everyone that only have opinions about things and never try things. So if I would be a decision maker in a, let's say for example, manufacturing industry or B2B company, I would definitely start testing. I would start ordering things and I would start purchasing things privately and for the company, no matter what size of the company.

AB: [00:13:43] That's already in the plan. If you go to Zooma's site today, it's an e-commerce site that you can explore. And one of the things that will be sold there from April 10, although soon you will be able to do a preorder, is The Onlification and Digitalisation Book. And that one will be the first product that we sell through Amazon. And as soon as Amazon is ready for the next step, we want to be the first service provider, as a sort of onlinification and digitalisation agency, selling our full offering through Amazon.