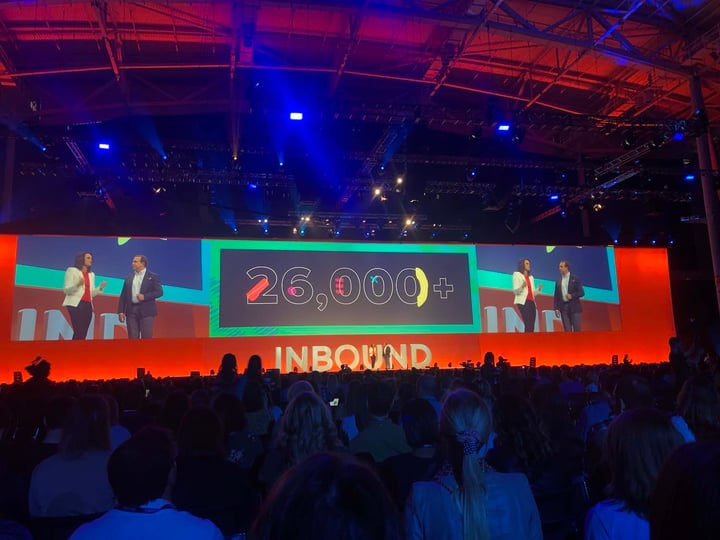 In September 2019 HubSpot held its annual INBOUND event in Boston. With some 26,000+ people attending and many interesting sessions and speakers, it's, of course, a great place to learn the tips and tricks of the inbound trade. But it's equally a great place to get a sense of emerging trends and potential shifts. Hence, rather than being a hands-on practical summary, this post highlights what I believe are the two key takeaways as to where inbound as a methodology seems to be headed in the not so distant future.

Personas are (going to be) dead. Long live data

Every year at INBOUND, co-founder and CEO Brian Halligan gets on stage for his much-anticipated keynote. Usually, he aims to push boundaries and get us to look at the bigger picture, and this year was no different. His talk about successful companies increasingly being so-called 'experience disruptors' was brilliant, and the point he aimed to make was that it's not what they sell, but rather how they sell it that makes them great companies that win in their markets. He spoke first about how incumbents focus on the traditional product-market fit whereas disruptors obsess over experience-market fit. Then he shifted to how incumbents give anonymous user experiences whereas disruptors provide a personalised experience. And here came the part of the keynote I found the most interesting, yet it seems a bit overlooked. The part where he essentially killed Personas as we have known them.

Starting out with a quote from Reed Hastings, the CEO of Netflix, saying 'we avoid psychographics', Brian spent three minutes explaining how disruptors have moved away from Personas to segments of data intending with the aim of ultimately reaching 'a segment of one'. Meaning you. Your preferences, your needs, your tastes. This, of course, has long been the dream of every data-driven marketer (hey, I wanted to do this 13 years ago!), but it's historically been hard (not to say impossible) to achieve for many companies. For practical reasons, companies that wanted to take an outside perspective (i.e. from prospect and customer) therefore used Personas as the foundation for creating relevant ('personalised') communication. Brian's ambition now seems to be to use HubSpot to change all this and move away from Personas in favour of data. Wow, that's certainly a change in HubSpot's own approach as well as for inbound agencies and customers all over the world. So, how can I be so sure about this?

2) HubSpot's ambition for a while now has been to build an integrated ecosystem, or 'all-on-one' platform as they refer to it, where data can be easily shared between all the various software tools that are integrated. Having transparent data and a single view of prospect and customer profiles within a company is a prerequisite to being able to deliver a personalised end-to-end customer experience.

3) Personas have been around in the HubSpot platform for a long time, but where is it now? I bet even the most avid HubSpot user can't immediately point it out. Let me guide you: In your HubSpot account, click the 'settings' icon in the main navigation bar. In the left sidebar menu, navigate to 'Properties'. In the 'Search for a property' field, enter Persona. Click the 'Persona' property. You're done, that's how you find 'Personas' in HubSpot today. Does it seem equally important in the product as it is in the inbound methodology itself?

For these reasons, I am sure. Brian Halligan killed the Persona, and it will become of less and less importance in favour of an increasing number of segments of data, with the vision of ultimately reaching the segment of one. This is going to be an exciting journey because HubSpot is no longer a small company. With 65,000 customers and 400,000 users world-wide and continued rapid growth, it can definitely make a dent in the universe as Apple co-founder Steve Jobs used to say. Everyone who ever interacts with a company and feels the experience is crap should clap their hands.

Is it going to be easy? For companies who sell content as a product, like Spotify, endless personalisation is not an issue. Creating content when content isn’t the product will for the foreseeable future require some degree of segmentation to be able to create the content in a rational way. But long-term, the vision is clear.

For a couple of years, we've been asked if people really do share their personal information on forms in exchange for access to great content. And our answer has always been the same; yes, as long as what you get is as valuable (or more) than you deem the information you give away is. Although I still hold this is true, I need only go to myself to realise that slightly more often than before I don't consume content that is gated. This is not because it is gated per se, but because of the hassle of the form and the time it takes. In some cases, it is simply easier to go back to google (where I almost always start) and click the next link than to go through the process of filling out that form. So is this only me, or is it part of a broader trend?

I think it's right to broaden out a little bit here, before narrowing it back down. Historically, all things eventually come to an end. Even the good ones get replaced by something even better. That's why we no longer have Walkman's or fax machines. That's why we no longer have Hotmail or a Kodak moment. And that is why we no longer have the same marketing tactics today as we had ten years ago. Entrepreneur, author, speaker and digital marketing guru Gary Vaynerchuk has stated that "marketers ruin everything". The essence of this is that a marketing tactic only works until it gets so broadly used that we (the target audience) get sick and tired of it, and then it gradually falls from grace.

When it comes to gated content, my opinion is that it has served (and still does) both consumers and companies well. It allows companies to see meaning in providing great, useful content. And when used right, the insights it gives about the user enables consumers to have a more relevant user experience. However, it also adds friction. The importance of fighting friction was already an important topic of last year's keynote from Brian Halligan at INBOUND18. It also became the main topic of this year's talk regarding experience disruptors mentioned earlier.

So, is there evidence that friction is finally affecting gated content too? Are marketers ruining it? Several speakers hinted at this in their talks. Somewhere agencies like Remington Begg of Impulse Creative, a HubSpot partner, who concluded in his talk about chatbots that 'an email doesn't (have to) make this a qualified lead' (so why do we put so much emphasis on capturing email addresses through forms?). Others explicitly mentioned it. Ashley Faus of Atlassian for example, talked about marketing going through a shift from grabbing attention, to holding attention, or to put it another way 'marketing isn't about who arrives. It's about who stays'. She then concluded that the marketing playbook had changed and that 'The long-term affinity for the brand is more important than driving a transactional landing page conversion'.

My conclusion is that it's likely that we have reached what some would refer to as 'peak gated content'. It's (still) going to work well as a lead conversion driver for the foreseeable future, but it is going to be gradually replaced by more effective tactics pioneered by those riding at the forefront of the next wave of inbound innovation. But, what are those tactics? Stay tuned to find out.

Stellan Björnesjö
Online Strategist at Zooma since 2012. 15+ years of experience as a manager, business developer and specialist within online and e-commerce. Has a perpetual drive for knowledge, and knows what to do with it. Find him on LinkedIn and Twitter.
Inbound
Keep me updated!
Subscribe