Podcast: Get to know Marko Kukanjac 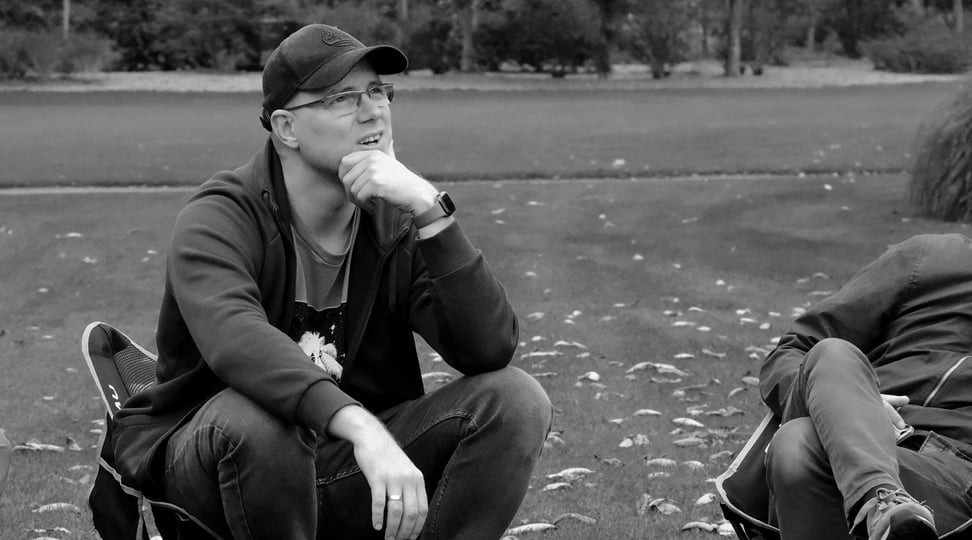 In this episode of The Onlinification Pod, we're continuing our series of getting to know the Zoomers. This week, it's Marko's turn.

The Onlinification Pod · #62: Getting to know Marko Kukanjac

Marko works as a full-stack developer here at Zooma, and he's a significant part of the technical team along with Zieyaad, Yeu-Kang and Jakob. Marko comes from Serbia, but he's lived here in Sweden since 2016 and has been a part of Zooma since 2020.

In this short episode, Marko and I discussed:

Hopefully, this episode should give you a little more information about Marko and insight into what a developer at Zooma does.

Enjoy! As usual, you can listen to The Onlinification Pod on the platform of your choice using the links below.

DB: [00:00:00.89] Hello and welcome to the Onlinification Pod, a weekly podcast about online and digital created by Zooma. I'm Doug, your host, and today we're not actually talking about online digital. Instead, we're carrying on a series of getting to know everyone who works at Zooma. And this week it's Marko Kunkanjac who's stepping up to the plate. He works as a HubSpot developer here at Zooma, and he's actually never been on a podcast before. So apart from some minor appearances on Serbian radio as a youngster, which you'll hear about if you listen to this episode, um, this is his first time and I think he did pretty well. I hope you enjoy getting to know Marco and remember to subscribe to the online information pod. Of course, if you haven't already, enjoy.

Marko: [00:01:09.59] No, actually, this is my first time. I don't remember that I've been in any other podcasts. No. I used to phone some radio stations before. So if that can be counted as a live attendance, then. Okay.

Marko: [00:01:30.90] Yeah, probably some political opinions about some topics that they were discussing.

DB: [00:01:48.20] I, uh, invited you on today because, uh, we kind of want to do an episode like this with everyone at Zooma, basically like I said, you know, um, just, uh, so we can kind of get to know and introduce everyone who works here, basically, because at the moment there's a quite small group of us at Zooma who, you know, are visible, uh, outside. You know, we have like Anders and Stella and Martin who are writing articles and appearing in videos and stuff. But there's a lot more of us here as well. So. So that's why I want you to join and others to join as well. Um.

Marko: [00:02:33.65] Well, I think the easiest way to define my position is a full-stack developer. But actually, I'm working mostly with the HubSpot development and that includes everything from frontend to the backend to kind of HubSpot integrations, etc.. So yeah, I'm a full-stack HubSpot developer, if that even exists. The title.

Marko: [00:03:08.87] I started two years ago, actually. Right in the middle of the pandemic. But I've been working together with Zooma for probably five years, probably as a consultant. So I've been actually in the Zooma office a lot before I started to actually work for Zooma. So it's, I think, total of five or four years. I'm not sure.

Marko: [00:04:11.51] Yeah, well, we have a Jacob. He's more like dot net developer and kind of tech lead. So we do separate things, but we work together a lot of times. But I would say that me, Kang and the other, the HubSpot developers team and our three of us work closely together, but actually, we all work together in a sense, and we have tech weekly meetings and yeah, but mostly it's, it's Zieyaad and I that are we've all been HubSpot development. Mm hmm.

Marko: [00:05:10.75] Yeah. Well, where? Where from? Where do you want me to start? Like, I was in elementary school. I was actually my dad bought me the first computer, so I was really fascinated with that. He wanted to keep me out of the street, that is his words. And so he signed me up for handball team and he bought me a computer and it went great because I was inside all of the time. So in the elementary school I was in the computer group that existed for some basic programming, like I think it was called Q Basic or something like that. The program and I was always fascinated with Bill Gates and the Microsoft, and I was always saying that I'm going to build my own operating system that's going to be called doors instead of windows. So that that's quite a fun thing in child's head. But I never did it, you know?

Marko: [00:06:13.15] It. It's still in progress. Yeah, it's it's still in progress. I think the name is not good, but then I, it went that way. So I just was always interested in computers. And I after high school, I've, I've attended college, it was called Information Communication Technologies College. So I finished that and I've got a degree in information technology. And then I went to specialization for electronic business and that included a lot of programming subjects like that and like database and that sort of stuff. And yeah, while I was attending college, I worked on a lot of projects as a freelancer. And yeah, basically when I finished college, I started my first job in Serbia, and I worked in two or three companies before I moved to Sweden. And then, yeah, now I'm here. So it's been five years since I lived in Sweden and I've been working for two companies and yeah, the second one is Zooma and yeah. So that's sort of background.

Marko: [00:08:03.34] Yeah, well, that's. Yeah, actually, it's not a tough question. I wanted to say it's a tough question, but to say it like like to put it simply, I've been I've been having a Swedish mindset in Serbia even when I was living there. So it was pretty natural to come and live here. I think this is the best country in the world to live in at the moment. We hope it's going to stay like this. But yeah, I was always drawn to changing places. I don't like being in one place like for long, but that has also changed now as I'm getting older. But I've moved from my hometown to bigger city and that was always my wish. So naturally, I wanted to move away from Serbia. I didn't like living there for many of reasons that I don't need to talk about them now. But yeah, it was a pretty easy decision actually. I had my best friend lived here and I visited him a couple of times and I was always talking with him about how life is in Sweden and everything and I liked what I heard and I've been involved in some projects in Denmark before. So I've, I've been in, in Denmark a couple of times and actually I like the whole Scandinavian style of living and the approach to life and everything, even though the Sweden and Denmark are similar. But of course they are not the same. And I just decided to give it a try. And yeah, I've, I've arranged some living place and then I've applied for a couple of jobs, sending my CV's to, to every company in Gothenberg and I was lucky that one company decided to hire me. And then I simply moved. And I never did regret that decision. And yeah, I'm still here, so that can tell you a lot. Yeah. Yeah, exactly.

Marko: [00:10:49.47] Yeah. The best part of the job for me is and I think most of the developers, but it's that feeling that you get when you work on something that's really challenging. And when you finish that and then it works, the feeling that you get that cannot be replaced with anything else. So I would say that's the best part of my job. And yeah, and I don't know, I think that's, that's the best description. Yeah.

Marko: [00:11:36.30] Yeah. And exactly. I'm actually yeah. And when we go live, so not, not the day after going live, but two days after going live, then I'm going to get that feeling that I'm really, really looking forward to.

DB: [00:12:08.22] And we we'll, uh, we will have you back on the podcast at some point to talk about, uh, something a bit more development related, hopefully. But, but now we know a bit more about.

Doug Bolton
Doug has been a Content Producer at Zooma since 2021. Originally English, he now lives in Sweden.
Being a Zoomer
Keep me updated!
Subscribe

Oh no! Could not find any posts that were tagged with “being-a-zoomer”!