Podcast: Get to know Zieyaad 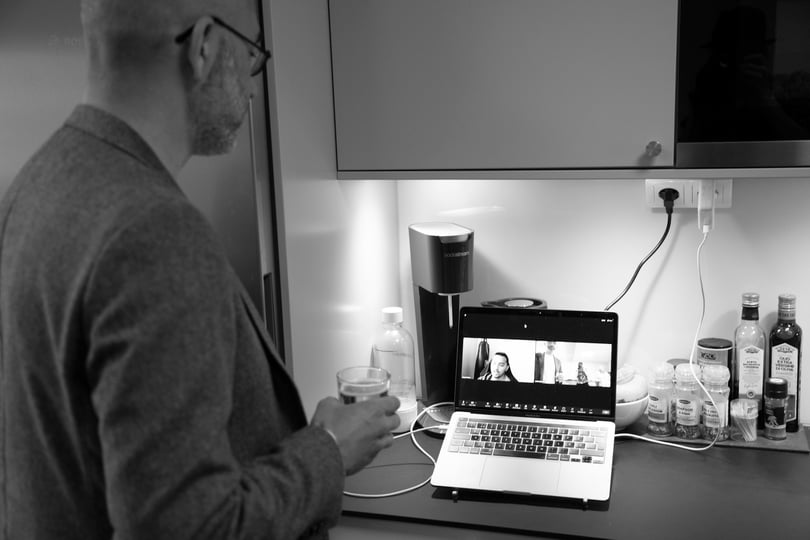 In this episode, I was joined by Zieyaad, a HubSpot developer at Zooma who works remotely from South Africa. Find out who Zieyaad is and what it's like to work full-time remotely.

The Onlinification Pod · #60 Get to know Zieyaad
In our conversation we talked about the following:

You can listen to this week's episode in the usual places - below, you'll find some links to The Onlinification Pod on leading podcast platforms.

AE: Hi and welcome to the Onlinification Pod, a podcast produced by Zooma. I'm Alex, your host. In this episode, I have invited Zieyaad Moses, who joined Zooma at the beginning of 2022. He works remotely from South Africa, so I thought it would be interesting to hear more about how it is to work remotely and who Zieyaad is. So I hope you enjoyed this episode. Now it's time to roll the Jingle.

AE: So how are you doing?

AE: Yeah. So today we are going to have one of these serious get to know a Zoomer, and today it's you. So let's start. Yes. Who are you and what do you do at Zooma?

ZM: Okay. So I'm based out in Cape Town. So at Zooma, I'm a HubSpot developer.

AE: And when did you start at Zooma?

ZM: I began sometime in March. I can't quite remember the exact date, but I think early March.

AE: So you've been here for about three months now?

AE: Yeah. Good. And so you work remotely from Cape Town? Yep. Yeah. And how did you find Zooma?

ZM: That's a funny thing. So I was looking for a more challenging role. So I was looking through the various boards of HubSpot and these things, because I kind of wanted to stay with HubSpot because I think it's a good platform to use. So as I was looking through, I saw Zooma and what I saw first was the Z in my name and a Z in Zooma. So I was like, Yeah, cool. It is kind of cool. And then I went onto the Zooma website. I saw some nice things, like so much content on the site. So I was like, This is kind of unique because like no one has this. They have a group site. So I was like, Gosh. And then also I YouTubed Anders and I saw one or two videos of him on YouTube. So I was like, That's funny. That's kind of cool. So I just went to go and apply when I spoke with Martin, the way he spoke about the company and about Zooma, it just was different. And also, I've never heard of companies that have employees working for them for plus ten years and are very happy or employees that come and go but then come back. So it was kind of a good image. And then once I spoke with Kang all and I was like, damn, this is good.

AE: Yeah. And I heard that he was impressed by you as well.

ZM: I hope so. Yeah, I hope so. He has a high standard of work ethic, which is kind of really amazing. So hopefully all of these good things can rub off on me.

AE: Yeah, I've heard. So. Yeah. So what did you do before you work at Zooma?

ZM: So I've worked mostly remote throughout my entire career, my long career. So my previous company, they were based in Manchester, so they were also HubSpot based. And I think that's where I kind of like HubSpot because it's very high and estimated the CMS. So when I worked for my previous company, they were doing these things. So I was like, that's kind of cool. But just again, the challenge, I needed more and Zooma is challenging me left, right and center.

AE: Zooma is the first Swedish company that you work for. Yeah. And what's your reflection so far?

ZM: I can't speak about the Swedish country itself, but what I can say is the people working with Zooma and the people and my fellow colleagues, it's amazing. Just it's like, how can I say not like not to sound cliché, but like family, but like if you need something, someone's there to assist you. If you have a problem, it will get sorted out. It will. It's a great company to work for.

AE:  And we have had some like After Works, which you have a town from South Africa. Tell us a bit about that.

ZM: So those were interesting because they were also my first time doing that. So it was kind of the first one was but there was a lot of talk inside of that, that one. But the one with the alumni, that was kind of cool. It's just I think the more we do it, the better it will be. So we'll be finding various like, oh, this is something we can improve on. So it's yeah. But it's getting better each time.

AE: Yeah. So there was a laptop where you were attending. Yeah.

AE: So, tell us a bit about what you do when you don't work.

ZM: Oh, so I have a family of one so far. There is this one on the way. A boy on the way. So most of my time now is spent evolved just around him because. And also, like studying. I'm trying to find a good work-life balance where I can work, study and also be with him. So I'm in the process of finding out what works for me. But with regards with my family, my son's at the age where he's officially a toddler. So he's driving me nuts like all the time. So it's kind of fun. So I'm just busy with him making him just busy watching him going through life, which is on its own another amazing journey.

ZM: He's going to be three.

AE: Cool. And yeah. And like, where do you live?

ZM: Oh, so I live in Cape Town. So is a small suburb. So I live on a lake. So it's quite nice. You get to hear every morning birds, frogs, now and then and those weird insects. So it's a nice sound to wake up to every morning. So it's nice. But on the other hand, it's quite cold here. So.

AE: What do you mean by cold?

ZM: So because we get an ocean breeze and like a breeze off the lake. So the winds are so the is quite chilly. So it's quite cold other than other suburbs.

AE: Uh-huh. Yeah. So you're not going to get surprised when you come to Sweden.

Speaker2: No. And also, I do think that in the future I might want to do what's the word, relocate. So whenever I look at a company that I want to work for, that also plays a big factor in it. So although Sweden is a great country also to potentially move to. So I had various factors when choosing my next role. So much for all the boxes. So maybe it happens, maybe it doesn't happen. But now, now I know that if it does happen, I make that move I would be happy to because it's a good country.

AE: Yeah. Thank you. It sounds very exotic where you are right now as well. Yeah.

ZM: You know, the wheater her is amazing. I think each country has its own issues happening in them. But yeah, just I think for my son's future, we need to make certain sacrifices.

ZM: If I was a very introvert, then it would be perfect for me. But I'm kind of in the mix. So I'm also I like to be out there since I've been I think once I was going to the office every day, I wanted to be more at home. But now that I'm at home, I want to be more out there. So it's like a Goldilocks where it's too hot, too cold.

ZM: But I do most people in general. So you would see maybe on all calls, I might be the be one of the last people they because I missed that engagement. But yes, so that's one of its challenges. The other one is trying to find motivation each morning because your work schedule is so flexible, you going to be like this is work time. And then trying to just work through it and not live not late like my son intervene. It was often. So yeah, you need to find a good work ethic and motivation to work.

AE: Yeah. And the time zone is really good for you now as well.

Speaker2: Yes. So we are in the same time zone then I think we move ahead or we move behind you sometime during the year.

AE: Yeah. Cool. What kind of projects have you been involved in now?

ZM: I've been on quite a few. I've also supported various other clients but just working off our internal build process. It's good. It's a massive learning curve. Again, Kang is a good developer, so trying to match what he's doing and trying to learn. The ways he has done things. It's good. It's really I wouldn't say hard. It's just challenging. And I like a challenge. So it's going good. So I've, I've been working on a few other clients, but just mostly support. So eventually since I'm doing support, I can eventually become more involved in the project.

AE: Yep. Cool. And for the listeners who don't watch this video, I need to explain that there is like a boxing sack in your backgrounder? Tell us a bit about that. When do you work out on that?

ZM: Yes. So actually, last year I had a back injury, but it's better because I was not playing. I was just doing too many things at once. I was surfing, doing all this way things hurt my back. So from then, I've been doing more bodyweight training stuff. So I'll be doing pull-ups, push-ups, boxing, doing more of just basically tried just to be fit. So but lately I've been calling that the Kang bag.

AE: Do you visualize it's Kang When you workout?

ZM: Now and then Kang drops bombs my way and I get shocked. I was like, what? And then I was like.

AE: Good. Yeah. Yeah. So I think this was a good, good episode to get to know you Zieyaad. Next, we're going to talk more about your expertise as a developer. Very nice to have you in the episode.