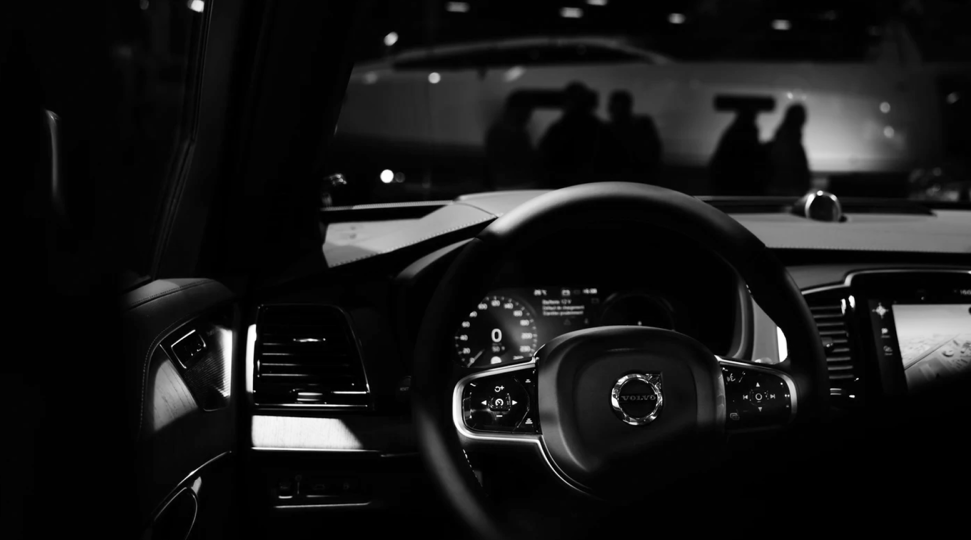 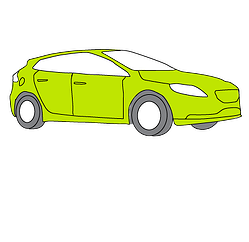 It’s pretty clear that the automotive industry in Europe is in trouble and has been so for the last couple of years. In fact, the European auto market is set to drop this year to the lowest volume of new car sales since 1995 with a -7.6% decline in eleven months of 2012 compared to the year before. Even in 1990, just as the Berlin Wall was being dismantled and the Cold War era came to an end, more new cars were sold in Europe than in 2012 as proven by the graph below based on data from the European Automotive Manufacturers’ Association (ACEA). 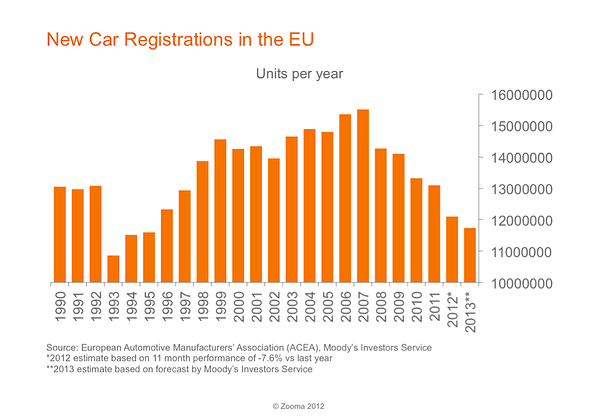 For 2013 Moody’s Investors Service predicts a continued weakening of the market with a forecast of a further -3% decline, meaning new car sales will have dropped more than -25% since the all-time high in 2007. Is this a temporary setback caused by the credit crunch and the banking collapse of 2008, or could it be more deeply rooted than that?

Let’s look at some more statistics. First of all, people in the so called ”rich world” have been driving less and less since the early 1990’s as explained by The Economist in a September 2012 article. To take a few examples, the pattern is clear in the UK, France and Germany and was so even before the crisis of 2008. Even in the car-crazy US, average kilometres travelled per car has dropped since 2005.

Then there is a second trend, also highlighted in the very same article, and that is the fact that young people are less and less interested in getting a driver’s license. In Germany, the share of young households without cars increased from 20% to 28% between 1998 and 2008, and in Sweden it was recently highlighted in an article that 60% of today’s 18-24 year olds in Stockholm do not have a driver’s license. With regards to the US, this article highlights that in 1983, 69% of all 17-year-olds had a driver’s license, but by 2008 that share had dropped to 50%. 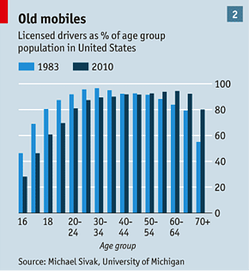 How come we’re seeing this trend of less driving and less interest in getting licenses? Is it the economy? The Economist and a number of other articles published this year (such as this one from Time Magazine) all claim a combination of things, the economy being one of the reasons, but not necessarily the primary one. To take a few examples;

So, have we seen “peak car” in the western world? It could well be the case. Does that spell the end of the European automotive industry? Not necessarily, but even as the population grows it will be much harder to obtain growth in new car sales in Europe and the US versus the developing markets in Asia, Africa and Latin America. As shown in the European Automotive Manufacturers’ Association’s report, car density has increased a lot in emerging markets since 1995, but there is a lot of room for growth. In the US however, the number of cars per inhabitant has actually dropped and we wouldn’t be surprised if we are to see the same trend in Europe and Japan in the next 5-10 years.

To round off, a few days ago telecom giant Ericsson released a discussion paper where CEO Hans Vestberg is quoted saying ”Change will never be this slow ever again” along with a claim that we will see more technological change in the next 10 years than we have experienced during the last 100 years. Chances are that as the future enfolds, an increasing share of the population won’t require a new car to hang on for the ride.

If you want to find out how we can help you adapt your business for this changing climate, feel free to get in touch with us at Zooma.

Stellan Björnesjö
Online Strategist at Zooma since 2012. 15+ years of experience as a manager, business developer and specialist within online and e-commerce. Has a perpetual drive for knowledge, and knows what to do with it. Find him on LinkedIn and Twitter.
Business strategy
Keep me updated!
Subscribe